Here is an article written and kindly provided by my friend Ziggy. He is a professional trader and this is his alternative way to approach trading my intraday levels. I really like this method and I strongly recommend trying it! Thanks Ziggy!

You can thank him in the new forum on my webpage!

I’ve put up a few documents in Dales thread over the months – here I’m exploring an alternative way of trading them, once in the trade it is entirely rule based and you need to know that the strike rate is worse, the pip total is worse…………… but the profit on my findings is greater and the drawdowns less. I looked at this alternative as I am aware there are traders following in the thread who are taking big financial risks in relation to their bank, I understand when trading with a small bank it seems the only way to make progress is to take big risks. Whilst I cannot advocate big risk trading, I can suggest a way of doing so which both offers some protection and damn good rewards.

First you absolutely must not trade when Macro news is due, or while price is responding in a volatile manner to that news.

Second you must not trade already tested levels, this can be subjective so in order to take away the subjectivity I have applied the following rule. If price gets to within 5 pips of the level and moves 15 or more pips away from the level, then it has been tested. You can apply whatever rule you think appropriate but for testing purposes I had to use a “fixed” basis.

Having filtered out the above, all other levels once touched are considered a trade.

Once in a trade, I have applied the following criteria.

We move to a 5min chart. Price comes back on the “right” side of the level line, closes below it, and also closes below a previous candle. If it does we immediately move our stop to the “swing” point.

Example – this is happening right now as I type on EU, 22nd Feb. 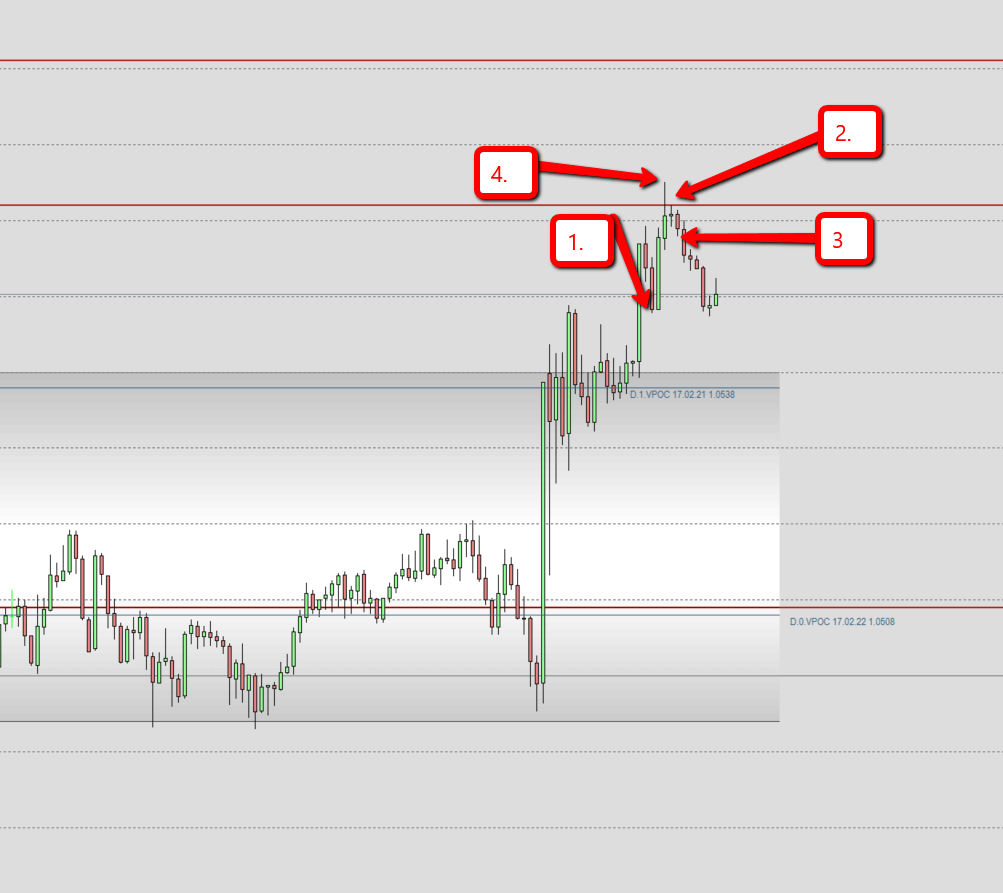 From this point on we simply let the trade play out, it either wins or loses, but crucially if it does lose, it’s not a 20 pip loss or even a 12 pip loss – in this case it’s a 3 pip plus your spread loss.

Profit take, make a choice and stick to it, for me it’s 20 pips you might have a different target, I’ll add some kind of matrix at the end to work with.

Risk………… I cannot really commend big risks but I know people will always take them in order to get a small bank started, so lets be really bold and say you have a £500 bank and are risking 10% per trade, how would it fare?

Well firstly I have potentially 254 trades, but because of the macro news & test rules only 150 of them become actual trades. Using this approach with a 20 pip profit take the strike rate is only 42%. Now whilst the original risk is 20 pips, because of moving the stops there are 63 losing trades, and some do indeed go for 20 pips, but on average the loss inclusive of spread (at my spread) is 6.5 pips, which brings the average risk down to 3.25%. You can see why taking this stop moving action becomes attractive.

Now for compounding. I work on the following basis, at the start of each day take your trading bank, take 10% of it & divide that by 20. This is your per pip £/$ for all trades that day, then tomorrow do the same calculation and be it up or down, that is your new pip value. For those of you who have to work in lots rather than pip value I’ll leave it to you to work out how many lots for each pair to achieve this same criteria.

How would it have fared so far? That opening £500 bank would now be £8,000 BUT that is by taking every trade that triggered day & night, in reality unless you use an EA that is not going to happen, but you get the general idea. Rapid growth becomes possible. In that time the worst drawdown on the bank is 27%. Now I can tell you that on a sizeable bank you are not going to want to be taking that kind of dip, but if you only have a small fund and want to make it work for you, this is a way of achieving it.

A word of caution, February has been a difficult month – I think that is true no matter how it has been traded, the principle of this way of trading is strong so we have to accept life can be tough at times. On my info using the -12/+10 approach would have given a flat February, using -20/+20 I’d be down by 60 pips, and using the approach I’ve just run through I’d be up by 60 pips.

BTW – that example trade has just made it’s 20 pip profit, so the total for Feb is now +80 J using this approach.

Of course none of this would be possible without Dale having given us the opportunity, I really hope all can benefit from his generosity.

Hope you at least find this interesting

*Here is the whole statistic: 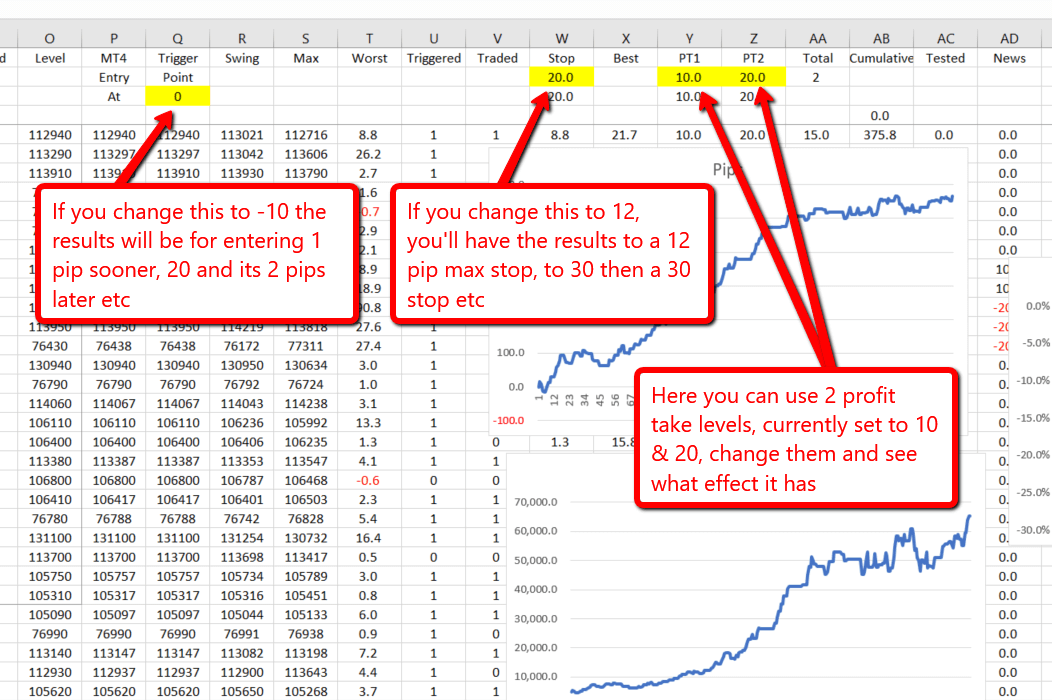 1 thought on “Alternative approach – by Ziggy”