How to participate in the USD/JPY uptrend

In yesterday’s post, I was talking about intraday resistance on USD/JPY. I said it was a bit risky scenario because this resistance went against a long-term uptrend (therefore it was a counter trend resistance).

Today, I would like to look more into the big picture of USD/JPY and comment on the strong long-term uptrend.

How to enter a trade in a trend

When I see a strong trend, I always look for ways how to jump in the trend and participate in it.

I never jump in it without giving it a thought. I always wait for a pull-back before I enter the trade.

A significant area on USD/JPY

So, let’s have a look at the USD/JPY now. If you look at the Daily chart, you can see strong buyers pushing the price up.

The price went through a pretty significant area and now it rotates above it.

Why is it a significant area? Because in the past, the price reacted to it several times. This level worked as a strong SUPPORT as well as a strong RESISTANCE.

I bet you heard about this scenario. It is nothing new, actually.

If this concept is totally new for you, you can read my article about it:

Let’s now have a look at the picture. It is a USD/JPY Daily chart, and the strong level (around 109.70) is highlighted in yellow. I also marked places where the price had strong reactions to this level in the past.

As you can see, at first the level worked as a strong SUPPORT (the price bounced upwards from it). Then the price went below this level, and reacted to it from below (level worked several times as a RESISTANCE).

Now the price went through the level again and this former RESISTANCE became a SUPPORT again! 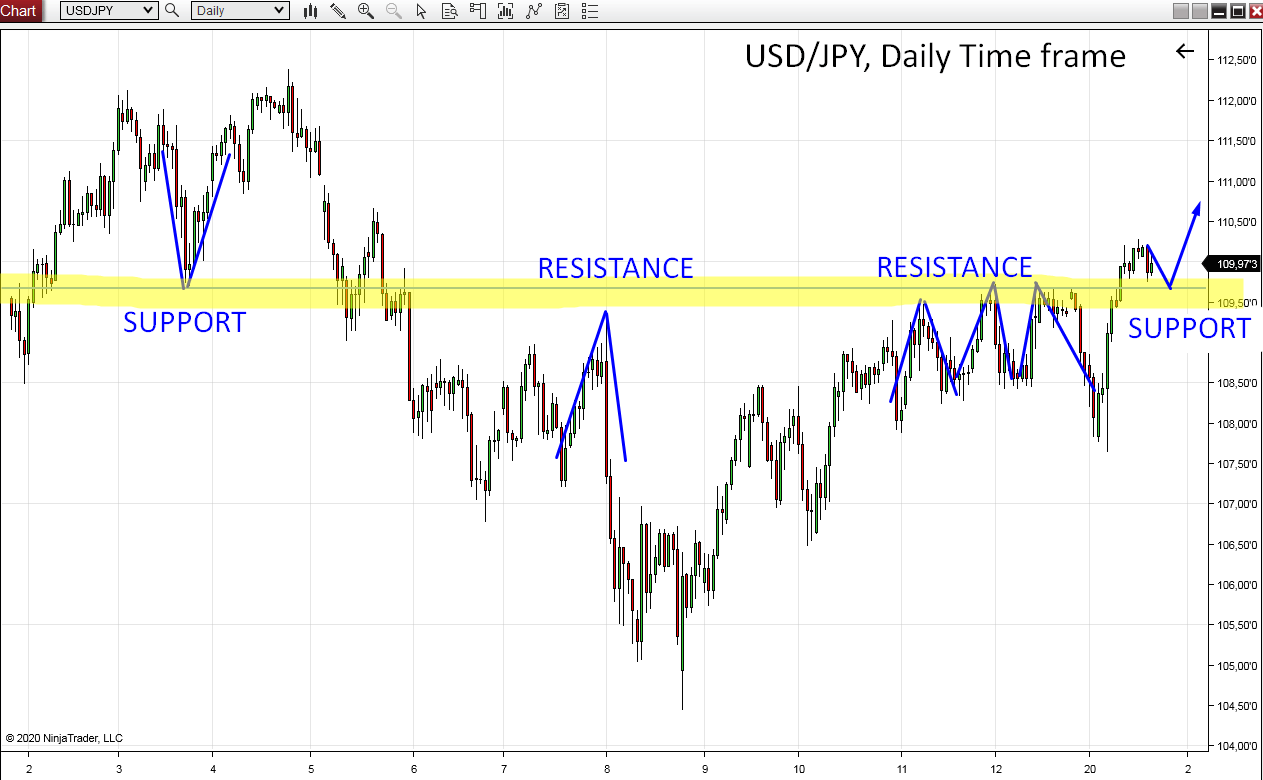 Remember, this trading opportunity is on a Daily chart. So if you decide to trade this, or any other trading scenario based on Daily charts – you need to have adequate Stop-Loss (for example 50 pips). You need to let the trade breathe – because it is a swing trade, not an intraday trade.

In this case there is only the Price Action setup (Resistance which turned into a Support). There is no other confirmation to this level.

Ideal scenario would be, if there also was a Volume Cluster created at the level (unfortunately, in this case there is no significant Volume Cluster).

Here is an article where you can learn more about this “Ideal scenario” and Volume Cluster which confirms a level:

This is just a quick reminder, that the -50% SALE on my "Investing Course & Indicator pack" ENDS TODAY.

You can get it here:
💰Stock Investing With Volume Profile: www.trader-dale.com/stock-investing-with-volume-profile/

Top class strategy from Patricia Williams. I can totally count on her when it comes to crypto mining to be the best miner. I earned good profit in 7days with my investment capital. One of the things that I truly enjoy about her platform is her constant innovation.. I suggest everybody to open a trading account with her.you can contact her now asap..👇 Whatsapp:+17169512645📞 Email:patriciawilliams58232@gmail.com☎️

I fund my trading account all by myself and give her the access to manage my trading account and i made a withdrawals of $10000 in a week, please i am very happy to introduce all friends and family to invest in themselves and there family. Instead of looking for other evil ways to make money or to increase there worth in life thanks😊😊 her contacts 👇👇 Email :richardamanda132@gmail.com WhatsApp :+17242985509

I have just made a short showcase video of my new

I just wanted to shoot you a quick reminder, that

‼️BIG NEWS! I have just released a brand new b

Did you take that trade on AUD/JPY? 👀 The one