Yesterday was a pretty busy day. The markets were quite nervous because of the news concerning China import tariffs. I decided to trade all my trading levels despite this market uncertainty. The first trade I took was soon after the news about China’s tariffs hit the markets. There was a pretty strong selling activity on the USD/JPY and the price made it quickly to my long level. This level was based on the Initial Setup which is designed to catch trend continuation trades. Unfortunately, this sell-off was too aggressive and even the significant volume cluster you can see in the picture below wasn’t strong enough to hold and reverse the price. I took a -12 pip SL pretty quickly. After that, I wanted to enter a reversal trade. This was a short from the same level I previously went long from (106.24). Unfortunately, the price reacted 2 pips sooner so my Reversal order didn’t get filled. Because of this, I discarded the Reversal trade. As you can see from the picture –  if I hadn’t discarded the Reversal and took the trade with a limit order, when the price actually properly tested the level, it would have been a profit. 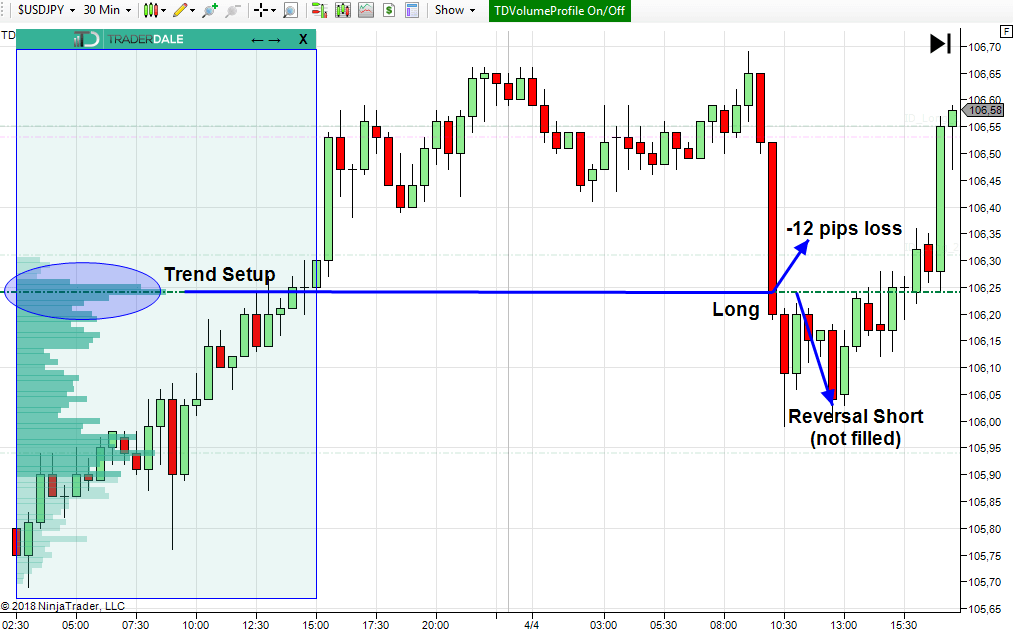 The second trade of the day was short on the USD/CAD. This trade was also based on the Trend Setup. I use this setup when there is strong and aggressive buying/selling activity, in other words, when there is a trend. Then I look for volume clusters within this trend. It is pretty clear from the picture below. This time the setup worked nicely and I took a quick +10 pips profit from this trade. 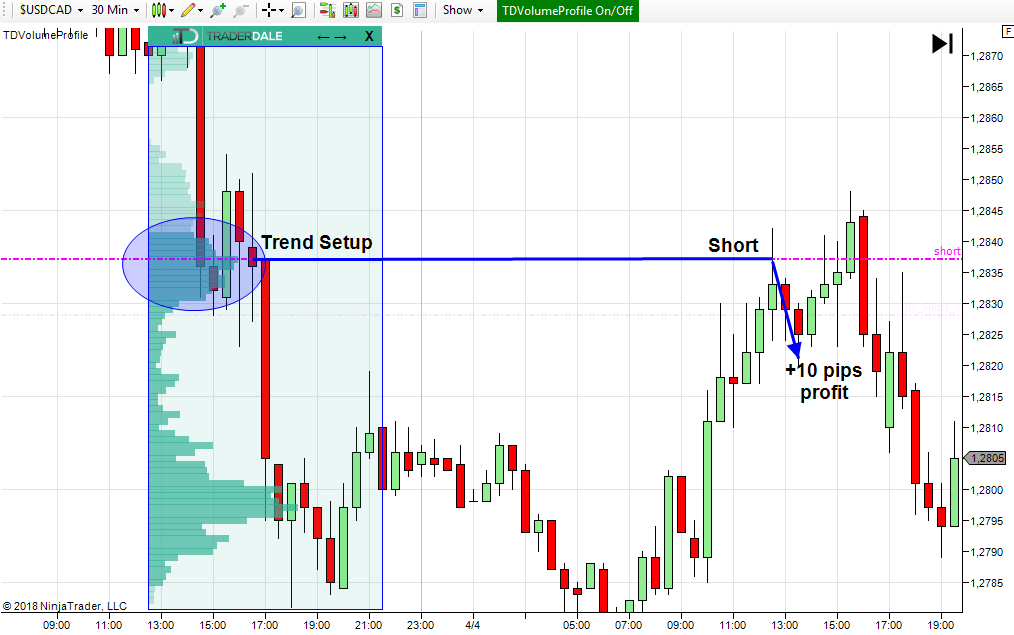 The third trade of the day was a short on the AUD/USD. This one was also based on the Trend Setup as well. There was an 8-9 pip reaction 3 pips below the level. I decided to be more aggressive and still take the trade despite the fact that the level got partly tested. In the end, this trade ended up as a losing trade. For this reason, I decided to take a long Reversal Trade (long trade from the exact price level I went short previously). I entered the reversal when the price returned back to the 0.7693 level and got a quick +10 pips profit from this one. 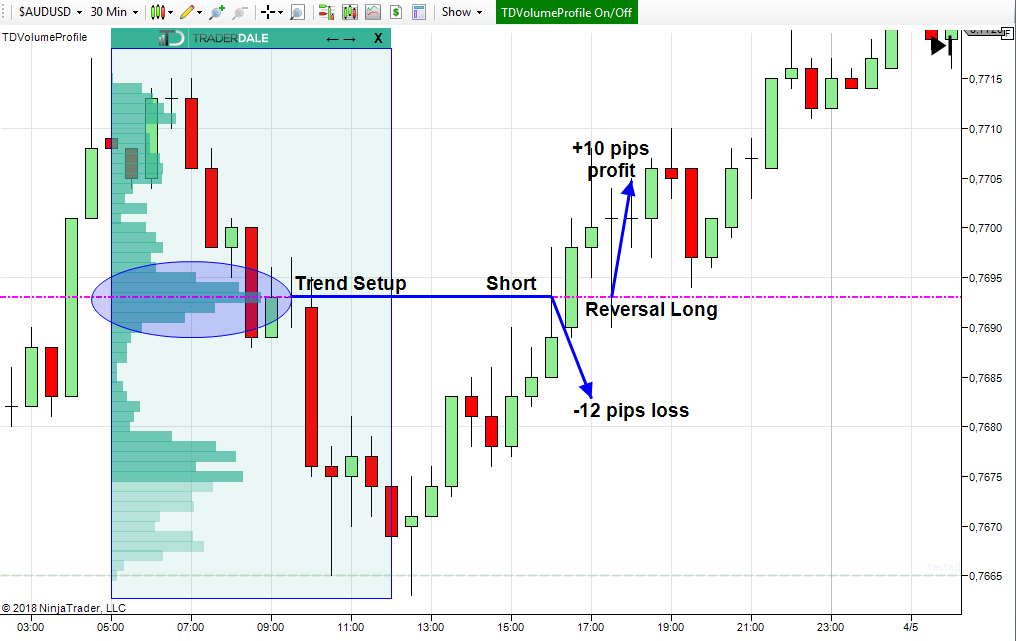 Another trade was on the EUR/USD. The idea behind my short level was our Rejection Setup. I trade this setup when there is a strong rejection of higher (or lower) prices. This time there was a pretty aggressive rejection of higher prices, which indicates strong and aggressive sellers. The heaviest volumes within this rejection were accumulated near 1.2305. When the price returned back to this level I went short from there and banked a quick +10 pip profit. 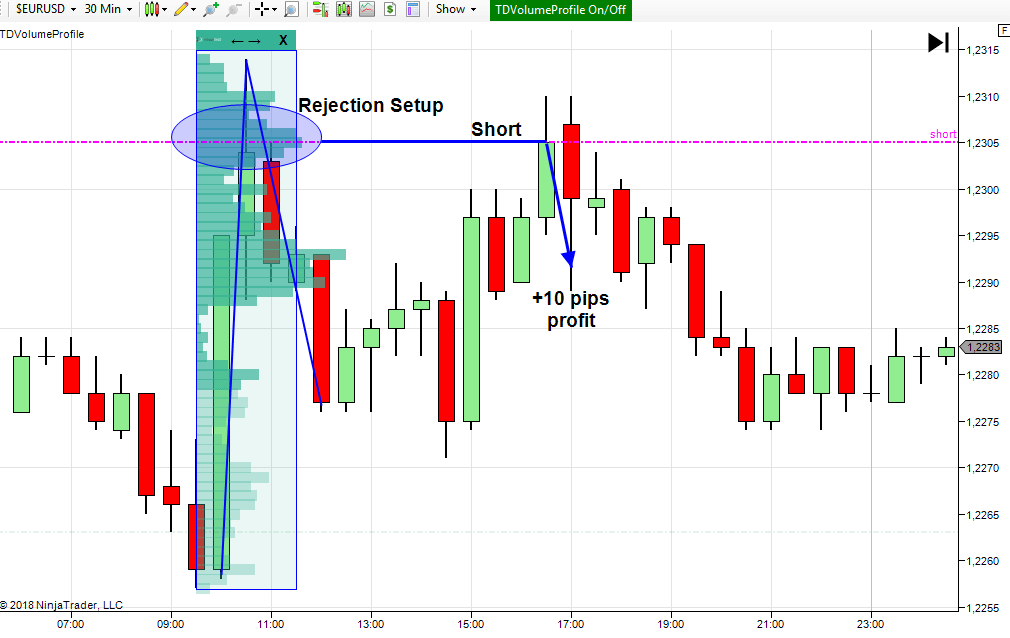 The last two trades were on the USD/JPY. The first one was a short trade based on the Volume Accumulation setup. Pretty heavy volumes got accumulated throughout the week around the 106.40-106.60 area. The Point of Control (POC) of this heavy volume area was at 106.53. This being a really strong S/R zone, I decided to go short from there. Surprisingly, there wasn’t any significant reaction to the level and the price got rather close to my stop loss. When the price returned to BE (106.53) I quit the trade and entered a Long Reversal Trade according to the rules of the strategy. When buyers are strong enough to push it through the weekly POC without any reaction, it is better to change your bias than fight the market.

This time I didn’t set up my PT to 10 pips but to 13. The reason was a failed auction at 106.65. When the price comes close to such area it tends to test above it. So for this reason, I placed my PT 1 pip above the failed auction (106.66). As you can see from the picture the Reversal worked nicely and I was able to get my +13 pips easily. Right now it seems that the buyers on the USD/JPY are actually pretty strong. They are pushing the price higher and higher without any significant pullbacks. 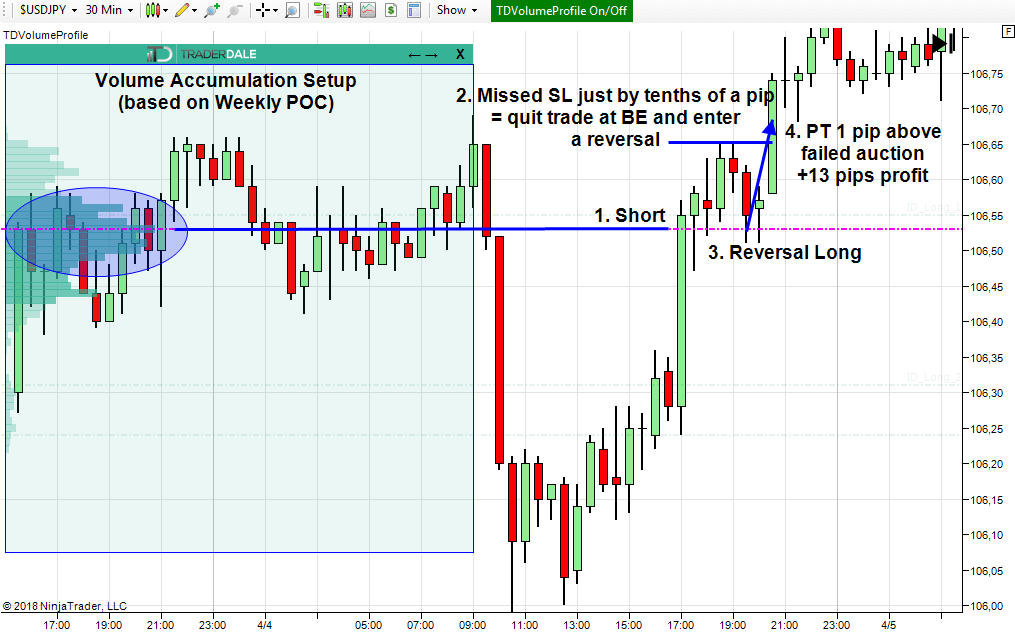 It was a pretty busy day yesterday. There was quite a lot of trades and lot of thinking needed during the session. I was commenting on all the trades as they went in my members’ forum so the members had a clear picture of what I was up to and what my thoughts were.

In the end, I finished up with 4 profits, 2 losses and 1 BE trade. Total pip count is +19 pips. I must say that Reversal Trades saved the day yesterday. Below are all the trades from my cTrader trading platform:

*P.S. If you would like to learn & trade with me every day you are very welcome to join me here: Dale’s Private Trading Course