8 Trading Myths That Will Sabotage Your Success – Part 1

There are certain opinions and approaches that seem to be vastly accepted by the majority of traders and trading educators. The internet is full of them, and they keep repeating. Nobody seems to question them though. This is how trading myths that sabotage your success get created. People just repeat and repeat some nonsense until it becomes a truth and a widely accepted general rule. In this article, I would like to address and bust the most ridiculous and potentially dangerous trading myths the internet is full of.

Myth #1: Indicators will make you profitable

Let’s start with a simple question: Who keeps feeding us traders with indicators again and again? Brokers do. How brokers make money? They make money on spreads, commisions, swaps and on your losing trades. Simply said, to make money, they need people to trade as much as possible until they lose all their trading balance.

How to make people trade (and lose)? Give them countless indicators, “teach” them how to work with them and create a false feeling of being in control (“the more indicators, the more in control you are“). And if that doesn’t work? Then they tell you to fund your trading account again and try a different indicator or a different indicator setting. Their message is: “this time it will surely work!“. No, it won’t work! It won’t work until you stop playing their silly game.

The absolute majority of currencies are traded by institutions, banks, hedge funds…do you really think those guys use indicators to allocate their money? Of course, they don’t. They make the game and play by their own rules. The best we can do is to track them – track their massive trading volumes. Those volumes can help us predict where they will move the market next.

How to track their volumes? With a Volume Profile tool.

How is Volume Profile different to all the other indicators? All the standard indicators use in their calculation two variables – 1. time and 2. historical price. That‘s it. So what they show you is delayed (old) info about how the price was moving. There is no additional value in that!

Volume Profile gives you information about the big guys, their trading positions and their intentions. That’s valuable information!

*This article series doesn’t get into how I use Volume Profile, but you can learn how to use it here:

A few days ago I stumbled upon a forex trading “guru” who really gave me a laugh.  What he was saying was that you don’t really need a high strike rate strategy/method. You only need to use positive RRR (in his case RRR = 1:2). His argument was: “This method has 50 % strike rate with RRR = 1:1, so we use RRR = 1:2 and it will be profitable because we will gain twice more than we lose! Here is the magic pill!”

This guy somehow forgot to mention that the more you stretch your Profit Targets, the bigger chance the price will turn, and you will have a losing trade. This is a simple law of probability. There is NO WAY around it. Here is a picture from my book that demonstrates it: 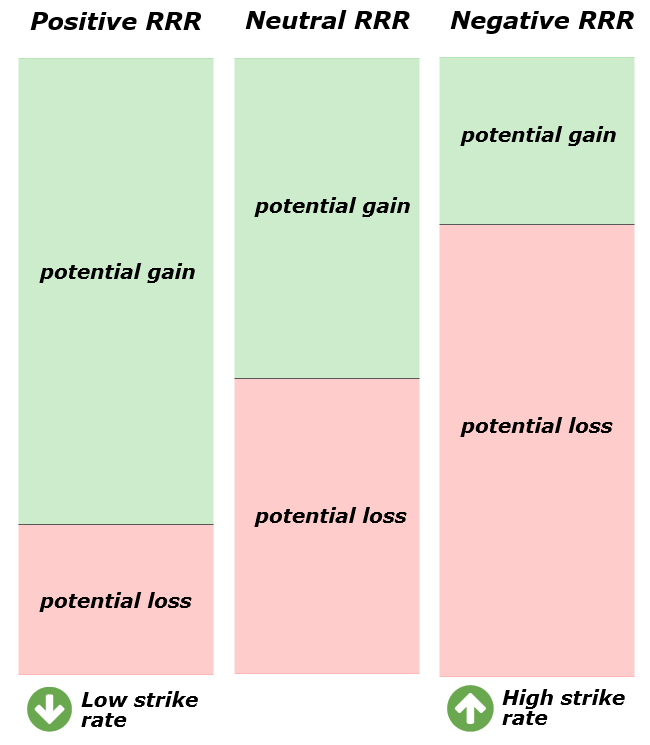 There is another factor that everybody seems to miss, time. The longer you are in an open position, the higher the chance that something unexpected will happen (something will go wrong). For example, the market could lose its momentum, or there can be some unexpected economic news that completely changes the direction and mood of the markets. A lot of unexpected things can happen. If you stretch your Profit Target too far to achieve a positive RRR, then the risk of something unexpected happening is bigger than if you used, for example, a RRR 1:1.

One more thing that people often fail to consider is the psychology. Sure, on paper it all looks simple but when your money is at stake, the game changes. Let’s say that you trade with a RRR 1:3 (risk 1, reward 3). You had 3 losing trades but now you are in a position, and you are already 80 % close to your profit target. The market went a long way in your direction. In a stressful situation like this, your evolutionary youngest part of the brain (which you use for logical thinking) is overruled by evolutionary older part of your brain which is responsible for more primitive thoughts (fear, greed,…). So instead of holding the trade until it reaches the full Profit Target, you grab the 80 %, so you have “at least something.” Sounds familiar? This is a pretty common phenomenon among traders.

My point is that it is really hard to hold trades with strongly positive RRR. Most people fail to do it in the long run because it is just too stressful. So, why get yourself into a stressful situation when you can trade comfortably with for example RRR 1:1.

Myth #3: Cut your losses fast and let the winners run

What this myth says is that if the price doesn’t go immediately in your favor, you quit your trade. Also, it implies that you hold the trades that run in your direction. In short, it tells you to be controlled by fear and greed. You close your positions because you are afraid that they don’t develop as nicely as you would like and you let the trades that are currently developing nicely run because you are greedy.

Yet, fear and greed are traders worst enemies!

What happens when you cut losses fast

In my experience, it is pretty normal, that sometimes the price overshoots your support/resistance level, or starts to rotate there. This, however, isn’t, in my opinion, any indication of future developments. So many times I’ve had the price go past my trading level, make a long rotation without any inclination that it’s going to turn, and then after few hours it suddenly reacted and in few short moments went into my Profit Target.

Rotation at support/resistance level instead of a quick reaction could simply mean that the big guys are starting to accumulate larger volume so they can turn a larger profit when the trend changes. Rotation is not a bad sign! Big guys just need some time to fully enter their positions. The bottom line is that good support/resistance doesn’t mean that the price will bounce off it quick.

What also happens is that price reacts really quickly and precisely to a trading support/resistance level. However, after a few minutes, it completely changes it’s direction and hits the stop loss. A quick reaction to a level doesn’t necessarily mean it is a strong level and that there will be a trend change!

So, instead of cutting losses short I suggest you use wide enough stops for your trading strategy. Let your positions breathe, let them develop.

What happens when you let the “winners” run

As far as “letting winners run” is concerned, let me show you a Bitcoin chart:

Have a look at how those guys attempting to let their winners run ended-up. Probably pretty depressed. Instead of quitting their positions in nice numbers around $12,000 – $18,000, they are now stuck at $6,000 (quite possibly in red numbers).

I suggest that you don’t let your winners run. Instead, make sure that a winner stays a winner. Remember, it is only a winner AFTER you close the trade. Whatever happens between your trade entry and exit is irrelevant, at least to your pocket 🙂

How do you make sure your winners stay winners? In trading nothing is sure, but I have a little trick you may like. The trick is: quit your trade at the closest relevant support or resistance area (learn here what relevant resistance is). If there is a strong resistance standing in the way of your trade, don’t fight. Just quit in green numbers. Make sure you winner stays a winner.

Myth #4: Always secure your position to a break-even point

“Secure your position to break-even point fast so your trade can end up either as a winner or as Break-even trade.” Sounds nice, right? Unicorns and rainbows do too!

Unfortunately, to every trick like this, there is also a downside. The downside to this is that by securing your position at break-even, you are not really letting the position breathe and develop. Also, your stop loss should be moved to a place, where the price most likely won’t go anymore. For this reason, I secure my position to a Reaction point. A reaction point is a place where the price actually turned. If the reaction to my level is what I was hoping for, the price shouldn’t test past this point again. 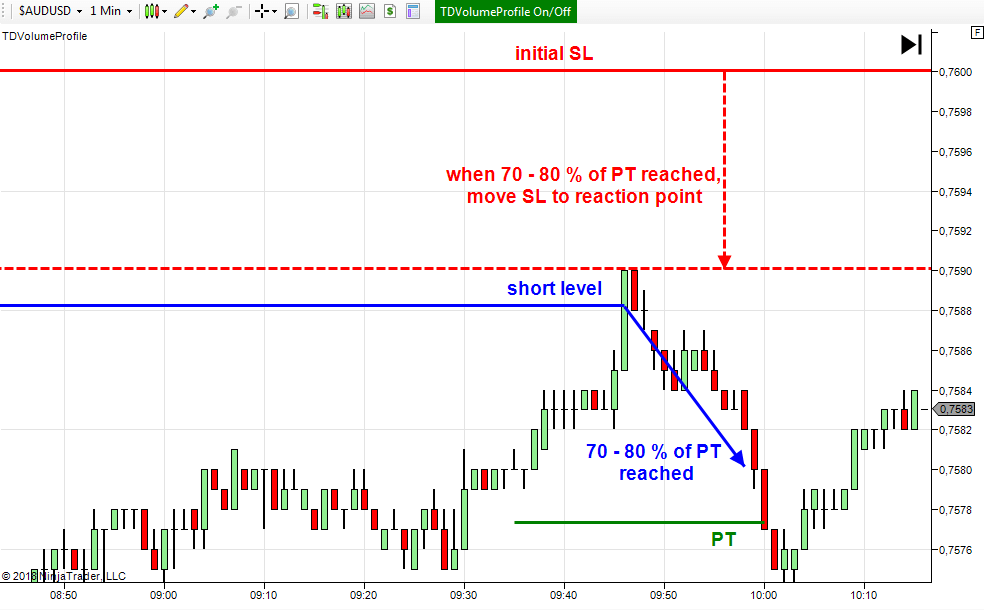 Why don’t I secure my position at Break-even? It is mostly because the price often returns back to S/R levels to test them again. What also happens is that the big guys (banks, institutions,…) sometimes push the price back to the support/resistances to add to their positions before they initiate a strong price reaction. They simply consume all the liquidity other traders left there (easy liquidity – that’s what the big guys want). Only after they have fully entered their position do they initiate the movement they intended.

Simply put, securing your position at break-even will close out many of your trades too quickly, resulting in many missed profitable trades.

I am a firm believer that you need to give your positions enough room to develop and to react to your support and resistance zones. For this reason, I employ a special position management method with my swing trades.

With this method, you don’t move your SL to secure your position as you would close your position only when it is absolutely clear that your support/resistance didn’t hold. You can learn more about this method here: Alternative SL method for swing trading.