8 Trading Myths That Will Sabotage Your Success – Part 2

Myth #5: Trade on a demo first

Another myth is that you should first trade on a demo and only then open a real account and trade there. People who recommend this probably don’t see the significant difference between trading a demo account and the real thing. A demo is just an easy-mode simulation. There is no slippage, minimal (fixed) spreads which never widen, your trades always get filled, and when you take a losing trade, your stop-loss gets triggered exactly at the price it was placed.

Training on a demo will also keep you from learning to handle the psychological strains associated with trading live funds. This is another disadvantage, and probably the most significant, as psychology is a critical factor in determining your level of success and you should train it purposefully.

Why would you train on a demo when you can train on a real account, in real market conditions? How do you do that? You simply open a very small trading account and then trade with the smallest size they allow (for example with micro lots where each pip is .10 cents). No matter how badly you perform, your mistakes cost you very little.

If you, for example, open an account with IC markets, then you need to deposit at least $200. Then you can trade with as low positions as 0.01 lot. If you take an intraday trade with 10 pip Stop-loss, then you risk $1 per trade. There are also brokers that will allow you to trade with only 0.001 lot positions.

Still, I wouldn’t recommend trading with the lowest possible positions as they make you careless. The problem is that you don’t really care if you lose or win at all because you risk only a few cents per trade. The trick is in finding the balance that is right for YOU. You want to trade really small positions because you are learning, but not too small positions. How do you know if it’s too small?

Your position sizing could be too small if, as an example, you find yourself leaving your trade open during macro news because you are too lazy to closer and reenter it. Another common case is when you don’t stick to your original stop-loss, and you keep increasing it more and more as the price approaches. My point is that if your position were a bit bigger, it would help you to stay more disciplined. And discipline is what you want to learn.

The bottom line is: regardless of whether you decide to trade mini, micro or nano lots, it is a MUCH better option than practicing on a demo. Eventually, you will need to trade real money if you want to move forward with your trading. The sooner you start, the better.

Myth #6: You can make quick and easy money trading the news

Let me put it this way: You can make quick and easy money trading the news, BUT you can also lose it just as fast.

The odds are against you

Trading when the spread is wide is a massive disadvantage, and it will significantly diminish your chances (I am talking about the long run, not about one lucky trade) of maintaining a statistical advantage you can apply consistently.

There is also another factor that plays strongly against you during any macro news release, slippage.

Slippage occurs when the price is moving too fast, and there simply isn’t enough liquidity to fill your desired position. This causes your trade entries and exits to be executed far from the place you wanted. If there is a strong reaction to the news, slippage could easily be 20 pips or more. This is a strategy killer.

No matter how good your strategy is, I can guarantee that it won’t be successful under such circumstances. There are very few guarantees in trading, but that is one you can take to the bank!

There is an interesting experiment I’d like you to try. First, open two trading platforms with a different data feed (different brokers). One of them should be a real account, the other on a demo. Then wait for a macro news release. Look carefully at the 1-minute chart, and just how significantly the price differs between those two brokers. Many times there will be a big difference between the two.

You can also bring this little experiment to the next level. Place two identical small limit-order positions (for example 0.01 lot) during the macro news. One on the real account and the other on the demo. You will be really surprised at how drastically the two trades will differ!

Do you want to trade your fully funded real account under such conditions? I don’t. I only trade when I have an edge, not when the odds are against me.

So yes, you can make fast money trading the news with one or two lucky trades, but in the long run, the odds are strongly against you.

You can’t predict the outcome of the news

After years of watching news and the market’s reaction to it, I’m a firm believer that consistently picking the direction of the market based on the news is an exercise in futility. Sometimes you can guess make an educated guess as to the economic data’s direction, and this is the easier part. The part that is even more difficult is determining how the markets will react.

Let me give you an example. On 24 October, there was a BOC (Bank of Canada) rate decision news. This is currently the most significant news for the Canadian Dollar. The consensus among the majority of analysts had been that the Bank of Canada would increase their Overnight Rate from 1.50 % to 1.75 %. This time the consensus was right, and the central bank really did hike rates.

There are two logical reactions to such news. First, there is no reaction to the news, because the outcome was anticipated. Second, the Canadian Dollar strengthens because of the rate hike. What really happened was that at first, the CAD strengthened a great deal, only to weaken much more the next day! 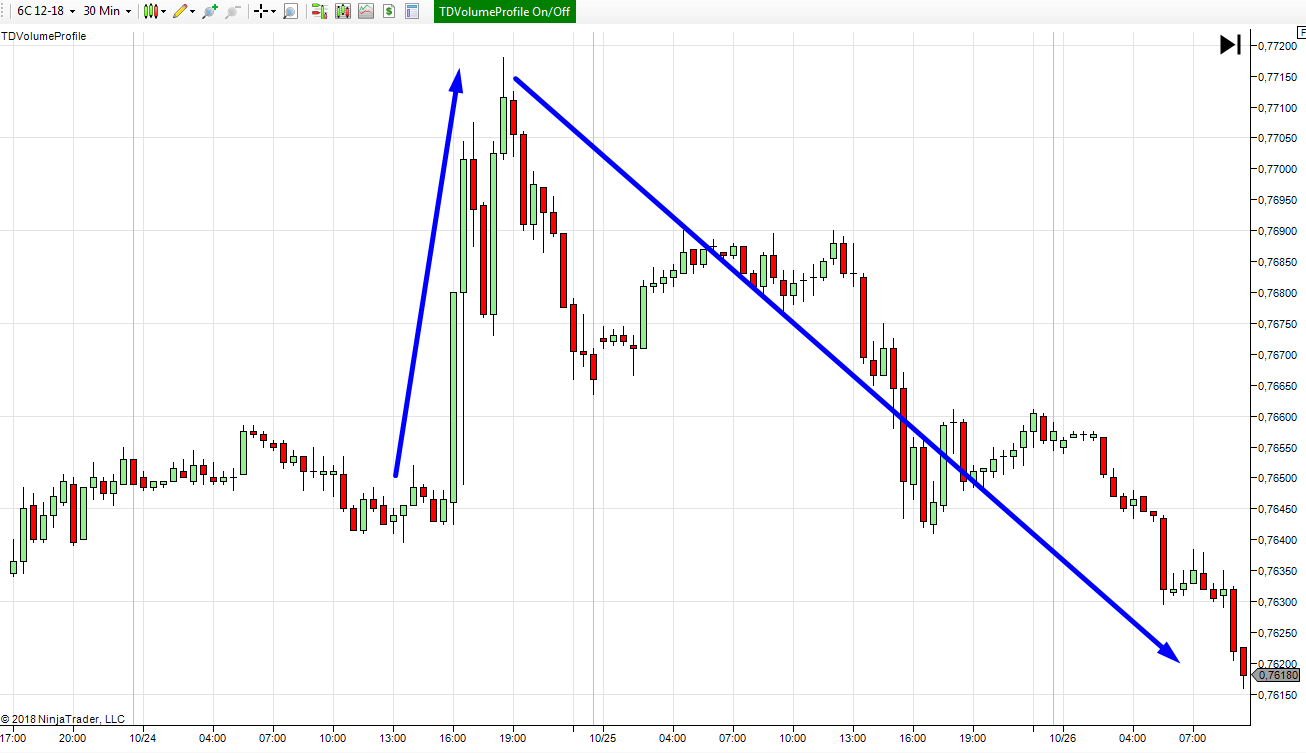 Is there a way to predict that? I don’t think so. I know I’ll have the brilliant hindsight traders saying, “of course you can predict that! It’s a classic case of ‘Buy the rumor and sell the news.” While I wouldn’t disagree with anyone saying that, how do you differentiate between the times that this occurs and the times it does not. The bottom line is there are too many variables and uncertainties around new to trade it with any form of consistency. That’s just one of many examples why I think it is better to avoid guessing the outcome of the news.

Why are all the “experts” talking about the news

If I recommend NOT trading the news then why do all the “experts” talk and write about the economic news all the time?  To find the answer, let’s think about how and where the money flows.

The majority of the “experts” are just employees of brokerages or similar companies. They get paid for writing about macro news. Why do the companies pay them for writing about the news? There are several reasons. For example: by writing about “complicated” stuff, the company looks super professional. Also, people who trade with the company see such analyses as an incentive to trade. One of the more bold tactics is that somebody from the brokerage company calls their clients and tells them some nonsense info about some economic news. They explicitly tell them that now is a good time to trade (because of the news). It makes no sense, right? Except it works and it brings money to the company.

This is no wild theory my friends; this is how it works. Still, want to trade the news? 🙂

Myth #7: Take only the best-looking trades

Do you sometimes hear stories of somebody doing a thorough analysis, finding the best stock or trading opportunity, betting all his money on it and then becoming a millionaire? Brokerage companies like to tell such stories, and they don’t necessarily need to be lies. The sad fact is that for 1 person who made such a great move, there are literally thousands of others who tried the same and failed. Why don’t we hear such stories? 1. They don’t sell, 2. people are ashamed to talk about their failures. Simple as that.

I don’t want to discourage you from doing a proper analysis or from looking at new investment ideas. What I want to say is that trading and investing, in general, is always a game of probabilities NOT certainty. No matter how thorough your analysis is, no matter how good your trading level or trading idea appears to be, you can always lose.

Even the best levels and investment ideas can have for example a 70% win/loss ratio. 70% is really good, but still, even if you maintain a winning percentage that high you will still experience periods of drawdown, and thus you must maintain proper position sizing. There are too many good traders who once had a great investment strategy, but massively over-leveraged and blew up during an unavoidable drawdown.

The funny thing is, I actually went into trading because I thought it was easy. Then I realized that “trading is the hardest way to make easy money”.

People from brokerages or trading courses usually try to get people trading by showing them a picture like this:

Unfortunately, this is simply not how trading works. Full-time traders are not people who make millions lying on a beach with their laptops. Trading is a work that requires full mental concentration, attention to detail and good old hard work. This can be done from a nicely set up home office, but thinking you’re going to just trade from a beach every day is unrealistic. No matter how much experience you have, you would be crazy to trade like that.

Anyone that trades real size wants to be able to get in an out of positions in an instant? Professional traders have backup power, internet, as well as computers and they are not going to leave it to trade from an unsecured location.

Don’t get me wrong, trading gives you freedom. It gives you the freedom to make free time whenever you want. It enables you to buy things you want and it enables you to live how you want. But first, you need to spend some considerable time in your office doing the hard work.