The Myth Surrounding Risk vs Reward – by Ziggy

How often have you read that in order to be successful in trading you must have a positive risk to reward ratio, reward being 1, 2, 3 or even 4 times your risk. What complete tosh, I’ll show you with real data from my own trading on just 1 instrument since 1st January 2014.

First some basics, I do not use indicators, I only use my eyeballs. I have spent thousands of hours screen starring at this instrument, it happens to be the Dax, and so I probably have a better idea how it will react than I do my wife! I have tried to show friends what I do but they simply cannot get it, so please don’t ask me to show you as it is instinctive for me now. I am either trading with the trend that has strong momentum and entering after a pullback, or trading a reversal after a strong momentum move has broken down. So, unless there is strong momentum to start with I simply don’t trade, this means I can and often am at my screen all day long without placing a single trade.

Entering the trade is then lets say “black magic”, but once in a trade my rules are very simple – I either get taken out at a loss of 20 pips, or I make my profit target – which I shall come to.

Some raw stats for you, over this period there have been 1972 trades – anyone who knows me from forexfactory will know that I collect data, lots of it!

So here is a table of some facts regarding those trades at different profit take levels vs my 20 pip stop.

Most people would look and say, go for 25 pips profit as it has the highest number of pips, but look over to the right hand side, it took a total of 216 trades to recover to a fresh bank high following the biggest dip, could you handle placing 216 trades just to get back to where you were? 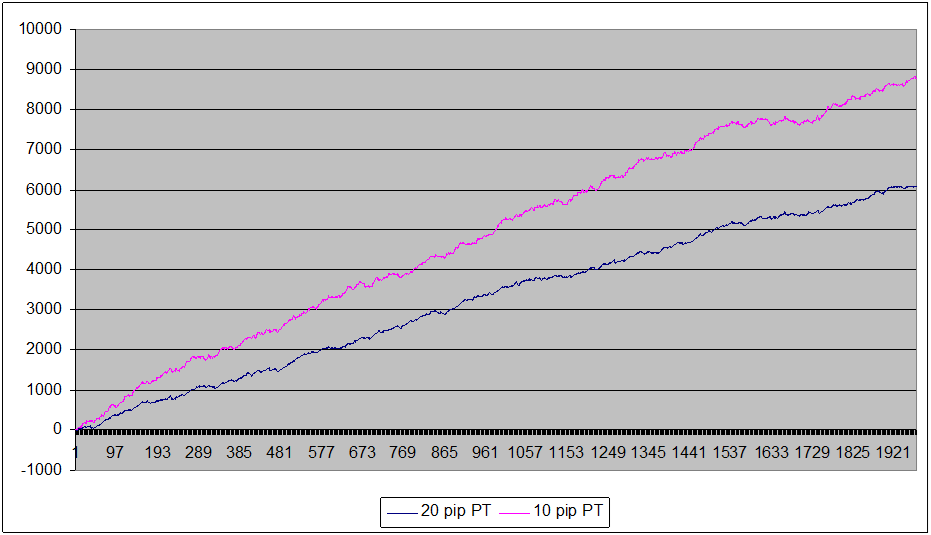 *EDIT – the legend is the wrong way round

This chart shows the pip dips using the 20 pip PT. 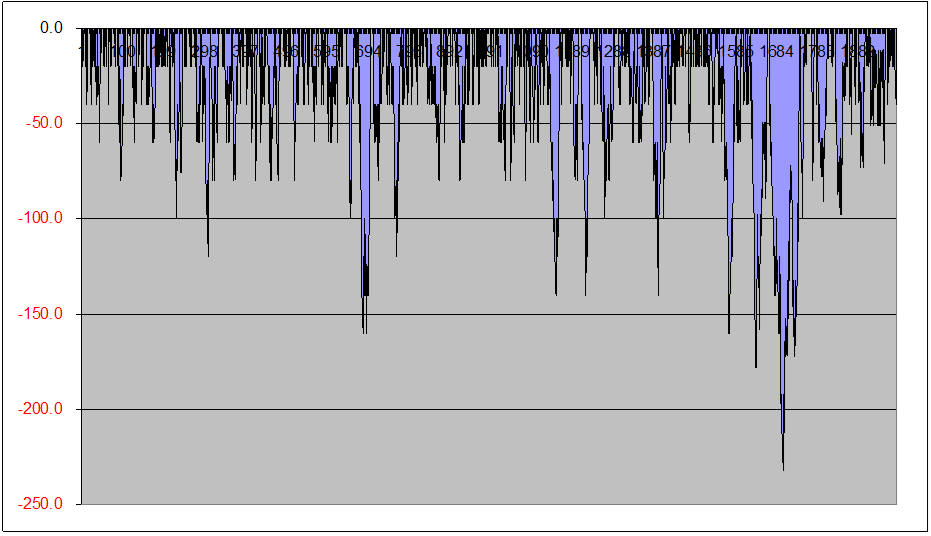 And this one the pip dips using a 10 pip PT 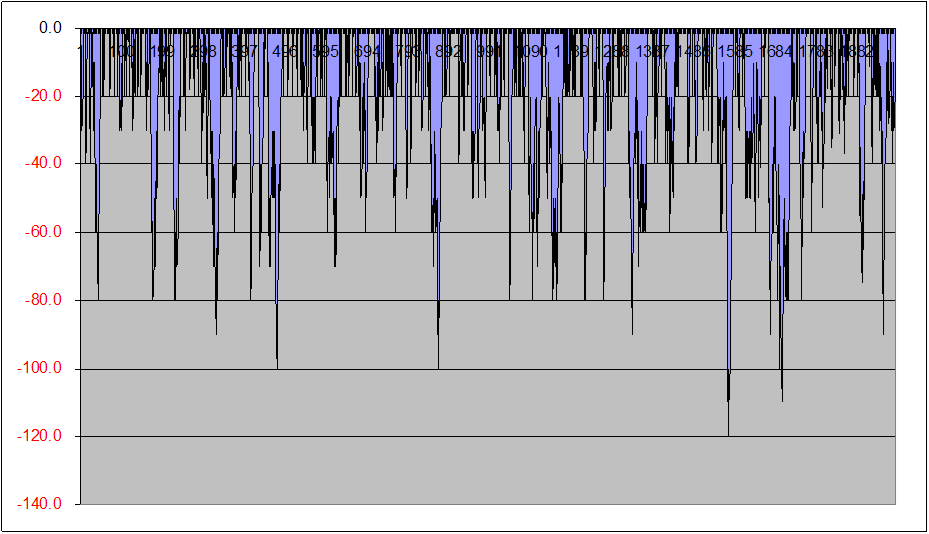 You can hopefully see that the dips here are not as vicious as they are going for 20 pips.

If you are trading for bank growth rather than income, and in the early stages of a trading career that is nearly always the case, you need to have some idea of what to expect.

Back to our 20 pip PT, we have several dips around the 150 pip level and the worst one so far is 232 pips. Given that I’m using a 20 pip stop that is 11.6x my risk, lets say I’m a bit gung ho and trade at 5% of my bank, that dip represents a 58% dip in my bank, which will need a 72% increase to get back where I was. Ouch, that is gonna hurt and I don’t want that, lets say I’m comfortable  with losing 20% as I have to accept some risk. Well that means I can trade risking 1.6% of my bank with my current knowledge and probably expect not to be more that 20% down, but of course we never know that will be the case. If we started out with a £2000 bank we would by now have grown that to £2.1 million. Pretty good – but not actually going to happen because you’d never get the big money trades on. But for illustration we’ll use it.

Over to the 10 pip PT. Here our biggest dip is 120 pips, because our high strike rate for fewer pips has compensated more quickly. Going through the same process we can risk 3.33% per trade and not expect to lose more than 20%, again we might, but on the basis of what we know we don’t expect to. However this time that same £2000 starting bank has grown to £35.5 million.

Of course this is never going to happen unless you think you can find a broker that is going to accept your £61,000 per pip trade hahahaha………… But what it does show is that by using a combination of strike rate, pip growth, pip dip information we can show that using a reward of 50% of risk can be more profitable than going for the touted must have R:R ratio’s. It boils down to appetite for risk and whether or not you are trading for an income or for growth, but unless you keep your own records of your trading you are going to be to some extent fighting in the dark.

Now although I am keeping a full set of data for Dales trades I have nowhere near enough information to be able to say what to expect, all I can say at this time is what has happened.

My data really is black & white, I never say ” oh, I’d have done this”, even though I often know that I would have in real life, as a consequence my info I like to think is always worse case………… although there are times when I “save” myself a loss only to find it would have been a profit.

I personally find a 12 pip stop for Dales trades too tight, I’m neither right or wrong, it’s just what suits me. Dale makes it work brilliantly well and if you trade with a 12 pip stop then I hope you do as well.

On the information I have, without trying to optimise it by back fitting, I prefer going for a 20 pip profit against a 20 pip stop. Over time I might learn that I need to adjust my thinking, but for now it is what I use and it has shown reasonable consistency. I must however go on record to say I really do not have enough live data to be able to make recommendations, sure I could optimise with my current data – only to find in a few weeks time a different set of rules would be better, so I will not do that. As a starting point I will use 20/20, sometimes I might move my stop to break even or even to take some profit, but as an underlying principle I will use 20/20.

Hope you find this interesting, and if you have been indoctrinated that you must have a R:R of “x”, then I hope that I’ve broken that myth.

Below is a chart of Dales trades using the 20/20 approach. 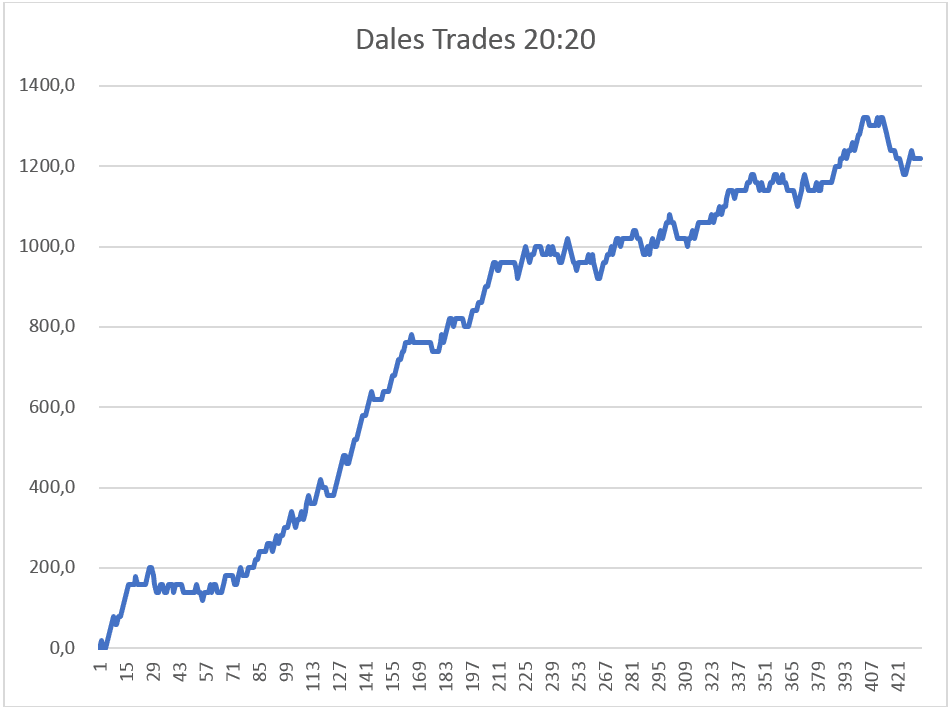