December proved to be a pretty slow month as there were only 22 trades. Historically markets tend to slow down through the last half of December which can reduce the number of trades we see. Normally I stop trading the last week of December, but if market conditions change, I will stop trading earlier in the month. For that reason, I stopped trading (intraday trades) on the 18th.

Let’s have a look at the December trades which originate from the trading levels I publish in my daily levels video. To start let’s cover the intraday trades and then I will go into the swing trades. These monthly recaps should give you a sample of what to expect.

As I mentioned in the beginning, there were only 22 trades in the 18 day period of December which I was actively trading. Despite a lower number of trades, the overall win/loss ratio was pretty good as there were 15 winning and 4 losing trades. 3 trades ended up close to BE (one of them -6 pips). Total pip count was +93 pips profit.

The figures above are based on someone taking all trades. Two of the winning trades were actually against a rather large spike on the JPY. If you filtered those trades out, there is nothing wrong with doing so.

Below is a table of all the trades along with the exact values. You can go through the charts yourself and see how the price reacted to my levels. 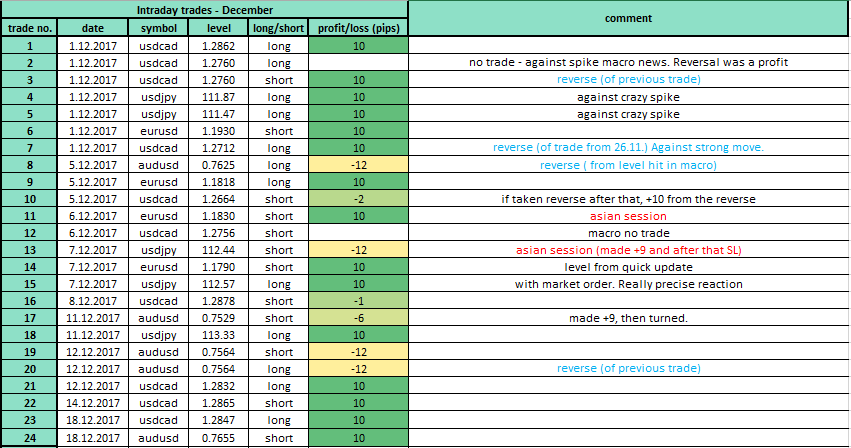 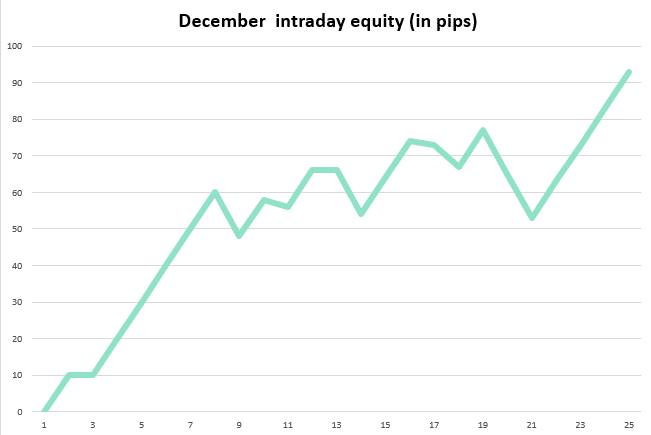 *Results were generated using a Simulated Trading Account and are Hypothetical.

There were only two “proper” swing trades during the month of December. One trade was a winner, and one was a loser. I say “proper” trades because two other levels got hit during an interest rate decision (Japan and the US). Because those trades would have been triggered by a news announcement, they would not be considered valid. Also, the one losing trade I have in my table below (USD/CAD) almost went to our profit target the last trading day of the year. I was rather fortunate because I quit this trade at the close of the year. However, if I held it according to the rules, I would have taken a loss during the NFP data last Friday.

I am very proud to announce that my new Flexible Volume Profile is finally completed and I was able to offer it to the members of my course as a sort of Christmas present 🙂 The profile proved to be extremely precise, fast, intuitive, and easy to use.

If you would like some more information about the profile, you can check out the new Volume Profile indicator here: TD’s Flexible Volume Profile and be sure to watch the video below first!

P.S – If you would like my Daily Levels so that you can start ‘Earning While You Learn,’ then check out our Advanced Volume Profile Training Course and Members Forum for more information – Click Here to Start Learning Now

P.P.S. You can check out the previous monthly recaps here: